The first step on the road to recovery and reconciliation.

The Métis Nation will seek justice for those who were robbed of their future, we will hear the stories of survivors and work with them to create a reconciliation process that reflects their needs to heal.

During the Symposium, survivors shared the devastating trauma of abuse, cultural genocide and the inter-generational impacts of being stolen from their families. Survivors who had found and returned to their birth families spoke of their healing journey. They also provided direction and informed the Métis Nation to conduct regional and local sessions with Sixties Scoop Survivors across the Métis Nation Homeland.

It is a significant time for the Métis Nation as we continue to seek justice for our people, particularly those whose lives have been impacted by the Sixties Scoop era.

The Symposium marked the first in a series of engagements, directed and guided by survivors, to shape the framework for reconciliation with Canada. In addition to presentations and consultation sessions, the Symposium launched a registration database to connect Métis survivors with the reconciliation process. A trauma team was on-site throughout the weekend to support the health and wellness needs of survivors in attendance, while a gathering place and accommodations are available for Métis Elders.

At the National Symposium, Métis leadership committed to hearing from Métis Nation Sixties Scoop survivors from across the Métis homeland through a series of engagement sessions. 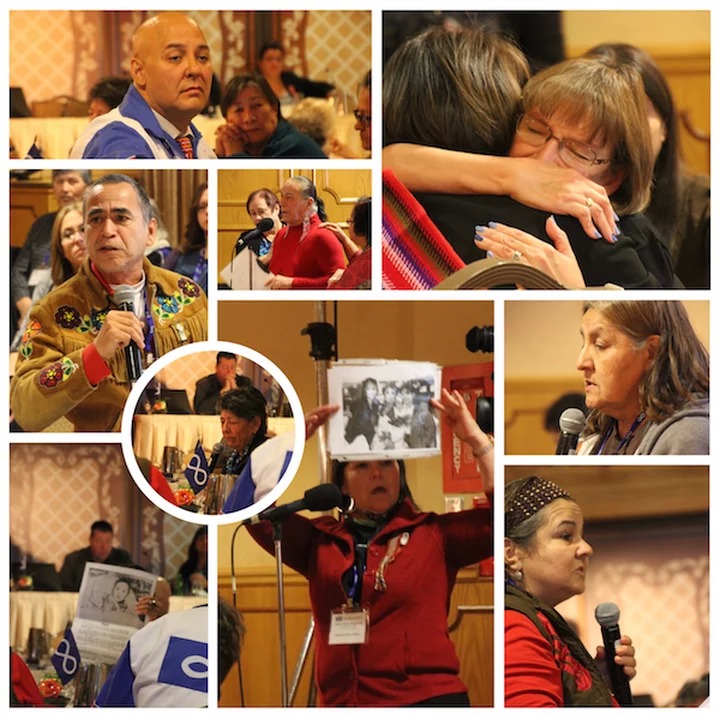 Following the National Symposium, a core group of individuals from the Manitoba Metis Federation and the Métis National Council embarked on a series of six engagement sessions across the Métis homeland to hear directly from Métis survivors of the Sixties Scoop.

As part of the Métis Nation Sixties Scoop Engagement Process, this video begins with the National Symposium held in October of 2018 and was showcased at engagement sessions across the Métis homeland.

The two meetings gave participants an opportunity to come together in a safe and inviting atmosphere to allow them to share their stories and ideas for a Métis Nation Sixties Scoop Agreement with the federal government.

Most noteworthy of mentioning was the performance by Andrea Currie with her performance of “Lost Moccasin”.

From March 29-31, 2019 in Edmonton, Alberta, Métis leadership in Alberta decided to hold an invitation-only event respecting the wishes of over 30 survivors engaged with the MNA who had asked that the event be private as they came forward to tell their stories.

MN-S held its engagement session from April 5-7, 2019 at the Saskatoon Inn in Saskatoon.

Survivors came together with MN-S leadership and spoke to the issues that confront them all today.

Saskatchewan is home to the AIM (Adopt an Indian and Métis) Program, a government-created program which was first piloted from 1967-1969 and continued until 1973.  Funded initially by the federal Department of Health and Welfare, this program was created to increase adoptions for First Nation and Métis children using adverting on television, radio and newspapers across Saskatchewan and Canada. Like other provincial programs, children were forcibly removed from their homes to cater to a provincial policy that promoted Metis children to foster families in Canada and oversees.

The MNO hosted their engagement session from April 12-14, 2019 at the Harbour Castle Hotel in Toronto.  Over 20 survivors attended the event coming forward to tell their story for the first time.   Survivors were comforted through the process of getting to know other survivors present and speaking through the five pillars of reconciliation that were presented to survivors for initial response and feedback to inform the process of negotiation.

As the final engagement session, MNBC hosted over 70 survivors from April 26-28, 2019 at the Hilton Vancouver Airport Hotel, in Richmond, BC.  At this engagement session, Shannon Marks. a Métis sixties scoop survivor and advocate shared with others in a keynote address her struggle in trying to find her mother from an early age and how the government denied her access to records necessary to be reunited.  At the Richmond event, another family torn apart and devasted by the sixties scoop reunited for the first time where cousins met each other, hoping to rebuild after a lifetime apart.

At the engagement session, and referenced throughout all six across the country, survivors told of separations that led to personal struggles over a lifetime. Some survivors came forward and told their stories for the first time, living lives as best as possible as functioning adults but carrying enormous trauma only released through these sessions.  It is the first step of healing for many people and families.​

As part of five pillars of reconciliation, reclamation of land, culture and kinship were major themes heard from Métis survivors.  The five specific pillars are reparations; apologies from provincial and federal governments; commemorations that include remembrance and education; accountability that involves acknowledgement and transparency of mistakes made by policymakers, government officials and law enforcement; and healing of survivors.

Information and direction from survivors from the engagement sessions are providing key input and recommendations to the Métis Nation in its efforts to reconcile the injustices suffered by Métis due to the Sixties Scoop. This reconciliation process for Métis Sixties Scoop survivors is independent and separate from any class action litigation claim.